Swedish Courses in Dalarna with Accommodation

1. Summary at a glance

This summer (2022) I was in Furudal myself and am enchanted by the beautifully located place with the red cottages and friendly people! Here you get a great allround offer: language course, accommodation and meals! I am in close contact with the people involved: They are happy to support you in your Swedish learning and to bring you closer to the Swedish culture.

Group courses: The Swedish courses can be held at all levels: from A1 to C1. So beginners are just as welcome as advanced students. The first registration for a course week determines the level for that week.

We recommend that you do a self-assessment to determine your level of Swedish.

Existing groups: If you would like to take a Swedish course as a group – be it as an existing course, friends or family – the offer is very convenient, because you can stay together at Vandrarhem or Marcusgård and arrange the course date directly with us.

Individual lessons or pair lessons: The offer is also suitable for single travelers who want to study more or less intensively. Your desired date and number of lessons you discuss with us before booking. 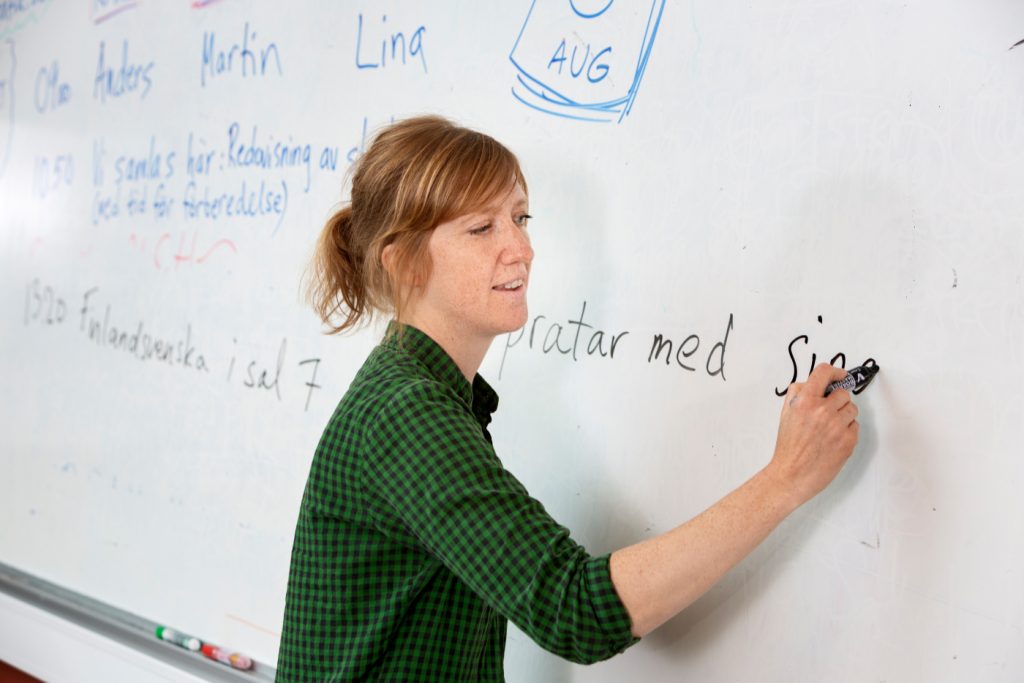 The Swedish courses are taught by native or bilingual teachers who take on different weeks depending on the season.

The choice of course material is based on the knowledge of the participants. Rivstart is used as a basis; supplementary material is provided. You do not need to buy a textbook.

During the course, Swedish is the main language; English and German can come in to explain grammar and special questions.

The accompanying program includes cultural activities and nature excursions, depending on the season and weather. Here, too, Swedish is spoken – adapted to the level of the participants.

The courses take place at Furudal Vandrarhem (hostel), where you can also stay.

Furudal is located in the middle of picturesque Dalarna (“the valleys”), near the towns of Rättvik (36 km), Orsa (37 km) and Mora (52 km). Dalarna is known for its red wooden houses, deep green forests and the naturally beautiful landscape around Lake Siljan, which was formed 1 million years ago by a meteorite impact. The region is one of the most typical and original regions in Sweden. In fact, many of the things that are considered typically Swedish originate from the area, which is rather sparsely populated with 300,000 inhabitants.

In addition to the dalahäst (dala horse), faluröd (Swedish or Falun red) and falukorv (Falu sausage) also come from Dalarna. The small colorful dala horse is considered an important national symbol and is the most bought souvenir in Sweden. It is made in Nusnäs (about 45 km from Furudal), where you can visit the workshops and look over the craftsmen’s shoulders as they carve and paint.

In Dalarna, both traditions are preserved and new ones are created: for example, there is the Vasalopp, the longest ski marathon in the world, 90 km long, which attracts 15,000 participants.

The famous crispbread (knäckebröd) bakery in Leksand, founded in 1920 and about 54 km away, is also worth a visit. Here, locally harvested rye is processed and formed into the typical round crispbread, with the Dala horse as the motif on the packaging.

In Furudal itself, Kärsti runs Hantverksbageriet Snitths, where you can buy fresh baked goods directly on site or enjoy them in the small café.

On Sunday before the course starts, there is a Välkomstkväll (welcome evening) where the course leader and the participants introduce themselves and the course program is presented. Afterwards a vegetarian dinner is served.

Breakfast is taken in the respective accommodations. At 13:00 there is a warm lunch at the vandrarhem, which is pre-ordered from the local café. The landlords of Marcusgård will provide transfer to the vandrarhem upon request.

The afternoon program starts from 15:00. Depending on the season and weather, a program is arranged from the following options:

2 afternoons are at your free disposal.

Extra offer:
Are you interested in emigrating to Sweden? Katja and Hannes are available for an exchange of experiences about emigration.

At Furudal Vandrarhem you can stay at the following conditions:

Bed linen and towels should be brought along, but can also be booked for a one-time fee of 10 € per person per week.

On this page you can view the individual rooms. Please book your accommodation directly at +46 760 211167 or by e-mail at info@furudalsvandrarhem.se! When booking please note “language course”!

Of course, you can also book a place on the beautiful camping site Sjöcamping Furudal.

Another accommodation option is Marcusgård farm, about 2.6 km from the vandrarhem. It is especially suitable for groups or families.

The prices here are:

In Furudal’s surroundings you will find many different options for hiking and cycling. In autumn the forests invite you to mushroom hunting and berry picking. Canoes and bicycles can be rented at the accommodations.

In winter you can go cross-country skiing, skating on the lake (when it is safely frozen) and snow hiking.

A more urban environment can be found in Rättvik (36 km) and Mora (52 km). In Rättvik you can walk out on the more than 600 m long footbridge onto Lake Siljan and have a wide view of the town and the surrounding area. The local Hemslöjd (handicraft store) in Rättvik is also highly recommended.

In Mora you can visit the museum of the widely known painter Anders Zorn and even walk through the finish gate of the Vasa marathon.

More information about excursions (museums, geological features, exhibitions) can be found on the homepages of the two accommodations. The landlords will be happy to help you plan activities.

Furudal is easily accessed by public transport:
There are train connections to Rättvik from Stockholm Central Station and Arlanda Airport. From the train station in Rättvik, bus line 351 will take you directly to Furudal. The bus stop is a 5-minute walk from the vandrarhem.

To the accommodation Marcusgård it is about 2,6 km.

Guests can be picked up by the landlords at the bus stop in Furudal, Rättvik or Mora.

For itineraries and bookings, our partner travel agency SkandAktiv, which specializes in travel to Scandinavia, will be happy to assist you:

*If less than 3 people register for a group course, the Vandrarhem offers to reduce the number of hours or adjust the price. Which option is chosen, is done in consultation with the registered persons.

... ... and this is what our participants say
about the lessons in the language school in Dalarna:

We really liked the combination of lessons in the morning and using the language during excursions in the afternoon. We baked Blåbärspaj with 2 women from the village, visited the library and had fika with old-established farmers. Furudal is a very nice vacation area and so we were able to combine vacation and language learning very well.
Many thanks to Maria for the very interesting and motivating language lessons and to Katja and Hannes for the great organization of the very nice accompanying program.