The Scandinavian countries are our closest neighbors to the north. For hundreds of years, economic, cultural and also linguistic bridges have existed between the North and the German-speaking area.

Relationship with the German Language

When traveling to the North, one often quickly realizes that some of what one reads is quite understandable. This is no coincidence! German and the Scandinavian languages are closely related. All of them belong to the Germanic languages within the Indo-European family, just like English or Dutch. At the beginning of our era, it is assumed that there was a common Germanic language, but in the first centuries after Christ, this language was divided into North, South and East Germanic – dialects were formed, which slowly became their own new languages.

While today’s German, English and Dutch belong to the subgroup of West Germanic, i.e. they are very closely related, East Germanic has long since died out with Gothic; and the modern languages Swedish, Danish, Icelandic, Faroese and Norwegian (Bokmål and Nynorsk) have emerged from North Germanic. Thus, while Dutch and German would be called „sisters,“ German and Swedish would be „cousins.“

North Germanic probably split off from the rest of Germanic in the 2nd century and slowly established itself as a common Scandinavian original language via Classical Protonordic (ca. 200-500). During the Late Norse phase (500-750), two major dialect groups formed, which we refer to as Eastern and Western Norse (now also called Insular and Continental Norse).

In the western part of Scandinavia, the well-transmitted Old West Norse (used in the sagas, the Edda poetry, and the Skaldic) subsequently became established and spread throughout Norway and the newly settled areas in the Atlantic, such as the Faroe Islands, Iceland, Greenland, the Shetlands, and the Hebrides. 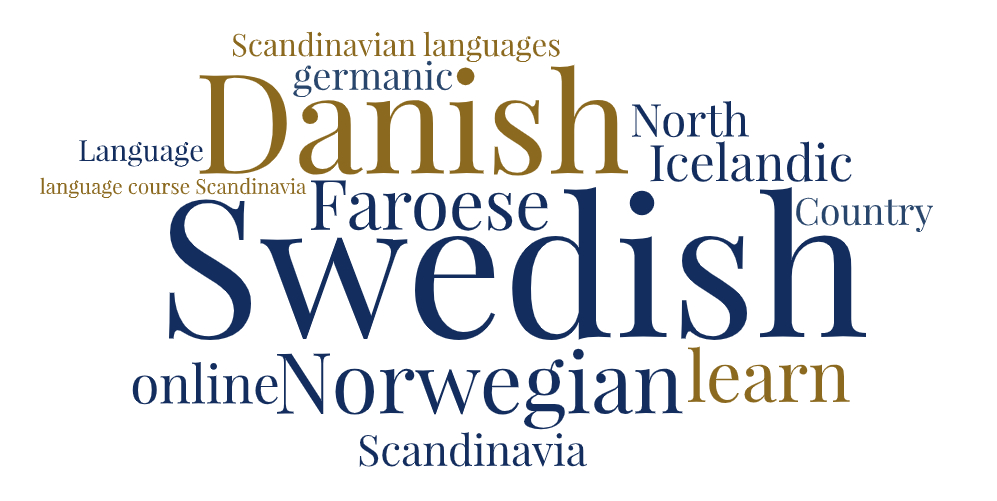 Gradually, dialects here formed the early forms of the languages still in use today, Icelandic, Faroese, Bokmål, and Nynorsk, while Norn became extinct in Shetland and the Orkneys. At the latest with the end of Old Norse around 1350, we can speak of these individual languages. While Icelandic and Faroese have changed little up to the present day – in terms of sentence structure, inflection, and word formation – and have undergone changes mainly in vocabulary and pronunciation, the changes on the continent have been much more lasting.

In Norway, the language tended to become very simplified. Not least, the already closely related colonial language Danish contributed intensively to the emergence of Bokmål, a language with strong Danish features. The pronunciation changed strongly, especially in the vowels (e.g. o is now pronounced like u and u like ü). Other sounds disappeared (ð and Þ), inflection was greatly simplified (cases disappeared, verb conjugation by person and number was unified, etc.), word formation took on new features, and sentence structure adapted to the simplified conjugation. The vocabulary, however, was most affected, as the Norwegian languages absorbed influences from other languages with which they came into contact.

In the course of national sovereignty aspirations, the desire arose in Norway in the early 19th century to free itself linguistically from Danish influence and to create something of its own on the basis of little-influenced original dialects. Through the work of Ivar Aasen, Nynorsk was created, a more original language than Bokmål, which is spoken by 20% of Norwegians.

In the eastern part of Scandinavia, Old Norse was formed, which forked into Runic Swedish and Danish. In addition, there is the predecessor of Gotlandic, which no longer exists as a language of its own and has been absorbed into Swedish. Since the tradition in Latin script – whereby the historical tradition for the East Nordic region is much thinner than for the West Nordic region – we speak of older and younger Old Swedish or Old Danish. After the Reformation and the translation of the Luther Bible as an important cornerstone, the older New Swedish emerged, which at the beginning of the 18th century merged into the New Swedish still in use. Swedish was and is spoken as a native language not only in Sweden, but also still in the old colony of Finland by 7% of the inhabitants and was also used in many areas of the Baltic States.

Influences of Other Languages

Since the turn of the millennium, not only Norwegian but also Swedish and Danish have undergone a number of profound changes. In many cases, these changes are similar in the languages. For example, many words were adopted from other languages and adapted to a greater or lesser extent to the language and script (so-called loanwords). Mainly such words came through the Christian mission from Latin (e.g. kloster, nunna, munk), from the High Middle Ages mainly from Low German through the Hanseatic contacts (förkyld, erfarenhet, kontor).

Later, many terms came from High German, mainly of a military nature, and from the Baroque period also from France (fåtölj, byrå, affisch). Other important influences are Dutch within the maritime language and Italian in banking and credit. Since the 20th century, terms have been borrowed mainly from English (hamburgare, surfa, top).

Furthermore, the subjunctive was lost and inflection was greatly simplified, so that, for example, in nouns and adjectives the cases disappeared and the genders masculine and feminine merged into one utrum. In verb inflection, there was no longer a distinction between plural and singular or individual perons.
Pronunciation and stress also changed greatly. Whereas in Urnordic the first syllable was always stressed, in Swedish and large parts of Norway a musical accent developed, which also allowed other stresses and is reflected today in a series of complex stress laws. This is why Swedes and Norwegians are thought to sing rather than speak.

The Danes, on the other hand, got the glottal stop „stød“ this way. Furthermore, especially the pronunciation of the vowels was changed by a chain shift. The Scandinavian vowel signs are thus mostly pronounced differently (e.g. bok like [bu:k] with a long /u/).

One Key for many Locks

In any case, it can be said that learning just one Scandinavian language will open up the others – at least this is true for Swedish, Norwegian and Danish: Although you will not always understand the spoken language (as Scandinavians do among themselves), written texts are usually easy to read!